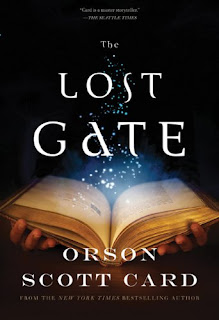 Orson Scott Card needs no introduction . . . One of the true stars of science fiction and fantasy writing, Card is an international bestselling author best known for the beloved classic Ender’s Game, which was widely read by millions of adults and young readers.

Card’s work has won multiple awards.  His novel Ender's Game (1985) and its sequel Speaker for the Dead (1986), both won the coveted Hugo and the Nebula Awards—making Card the only author to win both of America’s science fiction’s top prizes in consecutive years.  He’s also won four Locus Awards and a Hugo for the short story “Eye for An Eye.” And now the award-winning New York Times bestselling author launches the first book in a new fantasy series with THE LOST GATE (A Tor Hardcover; January 4, 2011; $24.99).

With free registration, Tor.com users will have first access to Chapter 2. To view this early, special preview of THE LOST GATE, please click on the following link: http://www.tor.com/lostgate/register.  There will be lots more to come between now and January 4th – additional excerpts, blog posts, tour dates and other exciting materials – but for now this should whet a few appetites for this amazing original fantasy epic.

=======
December 2010
Author in the Spotlight
Amy Romine
Visit Amy's Affiliate Author Page
=======
Join our Thursday Chat over at the
Yahoo Chat and Promo group!
(and claim your free e-books!)
=======
Win with Alternative-Read.com!

Amy Romine's Giveaway closes 31st December 2010. Winner announced the following day!
*All giveaways are open to all unless otherwise stated.

Thanks for taking the time to leave a sassy comment. It's truly appreciated. I aim to get back to you as soon as possible -- Sassy :)